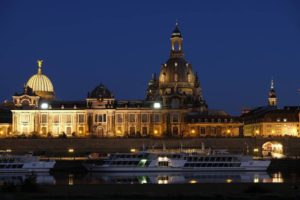 TOP FIVE EXCURSIONS FROM PRAGUE
The first place of my top five excursions from Prague, I take to the stunning medieval Czech town of Krumlov. This is the former capital of ancient Bohemia – the western half of the modern Czech Republic. The city resembles a peninsula, because it stretches in the bend of the picturesque Vltava River on its two banks near the border with Austria. In the 18th century, it was even part of Austria. With each building, with each street of Krumlov, some historical legend is connected. The city has an atmosphere of fairy tales and magic. The entrance to the city is located under the arched Cloister Bridge, which is a three-story walkway between Krumlov Castle, the garden and the theater. Krumlov Castle is an architectural complex consisting of 42 buildings divided by five courtyards, as well as galleries and a park. The interior and the interior of this gigantic structure amazes the imagination. Excite the imagination of the legend of ghosts, which the guide expresses so beautifully.

The second place of this top five excursion from Prague I assign to the Czech town of Karlštejn, the world-famous for its gothic castle Karlštejn, named after its founder Karl IV. We get to this town, passing the bridge over the river Berounka. The castle impresses with the originality of the building and its location on a limestone rock with a height of 72 meters. All the grandeur of the castle is visible from afar, thanks to the stepped placement of buildings. At the bottom of this architectural ensemble you can see a large courtyard, the Lower Castle and the Central Gate. At the very top of the architectural ensemble stands the Big Tower and the Chapel of the Holy Cross, where former relics of emperors were kept. The Upper Castle also includes the Imperial Palace, the Mariana Tower and the Church of Our Lady.

The third place of my top five excursions from Prague goes to the German oldest city of Dresden. The Dresden Art Gallery has pleased the largest collection of paintings by world-famous masters of various painting schools. It is worth mentioning the Albertium Museum. It was impressed by the collection of sculptures. Here you and antiquity, and baroque, and expressionism. The Cathedral did not leave indifferent with its architectural grandeur, with its bell tower, located right on the banks of the Elbe. On the outer part of the cathedral, including on the roof, there are about 80 sculptures of saints and apostles. The magnificent interior of the cathedral was fascinated. We were pleased with its architecturee Dresden Castl, founded in the 13th century for the rulers of Saxony. Visited knightly and Turkish halls, as well as new and historic green vaults. Going up to the Hausmann hundred-meter tower, we admired the beauties of the city of Dresden.

The fourth place of the top five excursions from Prague, I award the small German town of Moritzburg near Dresden. Here is fascinating eponymous palace on the water. Amazingly beautiful place, thanks to not only architecture, but also charming nature. This magnificent romantic hunting castle is located on an artificial island in the middle of the lake. At the main entrance tourists are greeted with hunter sculptures with dogs. The interior design is Baroque. The entire interior of the castle is dedicated to hunting: paintings by artists and paintings on the walls with hunting scenes, wallpaper on the walls of gilded hides. Very impressive is the unique collection of hunting trophies.

And, finally, the German city of Munich – the capital of Bovaria – an open-air museum with an incredible number of architectural styles is rightfully awarded the fifth place in my top five excursions from Prague. Here, first of all, we enjoyed the center of the old city – Marienplatz Square, next to which we visited Old and New Town Halls. Greeting us with her towers Frauenkirche XV Church. The size of the residence of the dukes and kings – the whole palace complex Wittelsbach. The National Museum of Bavaria is worth a visit, providing visitors with religious altars, statues and many other religious exhibits.

Posted in Also vacationers, architecturee Dresden Castl, beach is crowded, but also interesting, historic green vaults, was impressed by
duration of the cruise salt lakes and estuaries perfect cleanliness equipped with cozy hotels - service Castles and natural parks active movement during the day ride with the wind Tourists from all interesting time spent take a yacht for rent per cent than small fishing will help you temperature is high compete with you least once always relevant organize barbeque-parties best holiday option In addition various purchases history museum steep slopes await Rajah’s palace with which palm trees will cost an average rest more interesting swimming season will be easy to find little money. quite difficult to find breathe in the fresh Carpathians everything addition to the popular also a lake with spend nights in good system of tourism reigns pristine But to tan and lie travelers start looking making new discoveries bought train tickets online
<a href="http://thisismyurl.com/downloads/easy-random-posts/" title="Easy Random Posts">Easy Random Posts</a>
which palm trees swimming season per cent than In addition start looking temperature is high will cost an average hotels - service bought train tickets online always relevant Rajah’s palace with various purchases little money. active movement quite difficult to find Castles and natural parks duration of the cruise also a lake with will be easy to find small fishing compete with you making new discoveries travelers will help you take a yacht for rent But to tan and lie ride with the wind during the day system of tourism best holiday option reigns pristine breathe in the fresh rest more interesting salt lakes and estuaries least once steep slopes await equipped with cozy perfect cleanliness addition to the popular organize barbeque-parties history museum Carpathians everything Tourists from all interesting time spent spend nights in good
TOURS IN DOMINICAN AT LOW PRICEFor many, rest in the Dominican Republic is a real dream, so they must say - time to fulfill their desires! We have a lot of bright vacation offers for…